NESTLED against a decent stretch of the Albany Creek waterway, on the northern outskirts of Brisbane, a precious parcel of remnant urban bushland is arguably the most biologically diverse tract of land remaining in the Moreton Bay region.

Situated to the south of Albany Creek Road, and to the west of Beckett Road, the 51.4-hectare, almost flat Dawn Road Reserve lies just inside the Moreton Bay Regional Council’s boundary with the Brisbane City Council. Mahaca Park is adjacent to the Reserve’s north-western edge.

A century and a half ago, when Albany Creek was first settled, the forest was bordered mostly by farms and orchards. Today it is surrounded by four residential estates filled with modern homes – Albany Parkside, Woodland, Country Club and Clarendon, the latter being in Bridgeman Downs – as well as a sportsfield, the crematorium and the archery club.

In 2010, then Clarendon residents of 15 years, Ken and Joan Webster, remained delighted to overlook the southern perimeter of the Reserve and see the parade of birdlife and wildlife that visits daily.

“To be this close to the city and have remnant bushland and plenty of wildlife is magnificent,” Ken explained. The best thing, they both agreed, was that – in recent years – “the animal life has been able to flourish”.

Covered by open forest with several layers of vegetation, from tall trees down to delicate groundcovers, the Reserve is a significant patch of urban green belt that is part of a larger ecological corridor stretching from treed mountains in the west to estuary mangroves in the east.

The Reserve’s ecosystem is described as dry sclerophyll by its newest custodians, the Moreton Bay Regional Council (which organises Bushcare groups across the council area).

Its open canopy allows dappled light to reach tall shrubs, vines and smaller trees as well as grasses, smaller shrubs, herbaceous plants and, in moister pockets, ferns. However, it is also home to many different species of weeds.

Local Bushcare volunteer leader Janet Mangan said the most impressive aspect of the Reserve was that its groundcover was “so diverse and intact, as is its understorey”.

“You won’t find another place in Moreton Bay with such diversity,” Janet said. “We’ve probably got all the species of lomandra and there are just so many different grasses and groundcovers.”

We’ve got wallabies and koalas, both very vulnerable species that are not common in suburbia, and there have been platypus sightings

Because the forest is dominated by a wide variety of tall gums and other large trees that have reached 35m or more into the air, the Reserve is properly described as a “very tall dry sclerophyll forest”, dotted with small stands of pioneer rainforest species.

It is also home to a large and growing variety of native animals, native and migratory birds, insects and frogs. 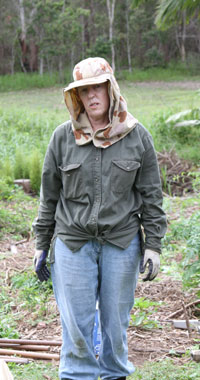 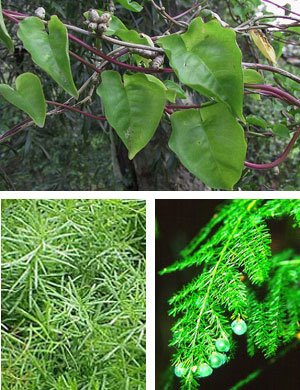 Three of the many weeds found in the Dawn Road Reserve are (clockwise from top) madeira vine, climbing asparagus fern and clumping asparagus (a groundcover).

“We’ve got wallabies and koalas, both very vulnerable species that are not common in suburbia, and there have been platypus sightings too,” Janet explained.

“At first look, some areas of the Reserve appear a bit shabby to the untrained eye, with lots of lantana, but that denser, low vegetation provides valuable shelter for small wildlife.”

But has this block of bushland, now surrounded by suburbia, always been appreciated for its considerable ecological values?

Look back over the past century and a half, and beyond. Over that time the land has been traversed by indigenous tribes, pioneering gold-rush traffic, early settlers, farmers and orchardists, horse-riders, residents, their children and their visitors.

Many probably would have given this bushland little thought but, in the past 20 years, various groups of people have begun to survey, document and preserve the forest’s incredible biodiversity.

In that time, though, two groups have caused considerable concern to those who have grown to love and respect the Dawn Road Reserve.

One – backed by the State Government of the day and eager developers – wanted the bushland bulldozed for a blend of private and public housing. The other, more recently, has seen the destruction of significant tracts of ecologically sensitive land as well as damage to important fire access trails by motorbike riders – who, unlike pedestrians, pets on leashes and horse riders – are not permitted to use the Reserve’s trails.

Back in the mid-1990s, those who were eager to subdivide the bushland for medium- and high-density small lot and unit-type dwellings didn’t bargain on vociferous and influential objections from hundreds of Albany Creek and nearby Bridgeman Downs residents.

The residents – backed by the then Member for Aspley, John Goss – fought the proposal on a number of fronts, eventually seeing the land pass from State ownership to local government responsibility. Two of the residents who campaigned throughout this period to save the bushland from sub-division were the Websters.

“Some residents objected on safety grounds, but others – like us – simply didn’t want to lose the bush because of its ecological values,” Joan Webster explained.

“In 1995, the then Member for Everton was all for the Queensland Housing Commission selling the land to a developer and seeing it developed as a housing estate with around 17 per cent set aside for public housing in a joint-venture arrangement.”

Their campaign saw Clarendon and Country Club residents lobby first their local MP, then other State Government and Opposition MPs and then their Federal counterparts to demonstrate the real value of the bushland and the strong level of local support for it to remain in its natural state.

After nearly two years of behind-the-scenes negotiations, the then new State Government instructed the Queensland Housing Commission to transfer ownership of the land to the then Pine Rivers Shire Council – selling off a small portion facing Keong Road to cover council’s costs – and to keep the forest as a Reserve. The PRSC itself would later, in 2008, become part of the amalgamated Moreton Bay Regional Council (MBRC).

Since 2006, a group of keen local residents has been attending monthly Bushcare activities under the auspices of the MBRC’s Bushcare officers. 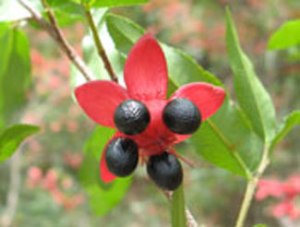 The ochna serrulata berry up close.
Can you see from where it gets its common name,
the Mickey Mouse plant? 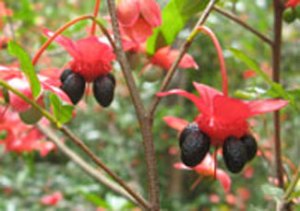 When ochna serrulata berries turn to a dark colour,
birds feast on them, spreading the persistent weed
far and wide. 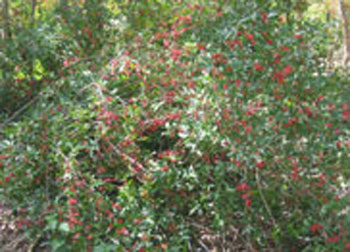 Ochna serrulata – otherwise known as the Mickey Mouse plant –
is a persistent pest species that has migrated from gardens
to the Dawn Road Reserve, in places forming great thickets.

But nature, too, has wrought significant change on the Reserve. More recently, the savage mid-November 2008 supercell thunderstorm – that ravaged The Gap, Ferny Grove, Arana Hills and Albany Creek, causing millions of dollars of damage to homes and businesses – also heavily scarred pockets of the Reserve as high winds and multiple “touch-downs” tore at sections of the canopy and its understorey.

Large trees were ripped out of the ground and tossed aside like discarded toys. Tall tree tops were snapped off and at least one 30m tall ironbark was twisted so violently that it exploded into long shards across a fire trail.

However, the Reserve has proved its resilience and, nearly seven years on, much of the storm damage is far less obvious.

Indeed, over the past 155 years – since James Cash became the first white settler in the district (known originally as Chinaman’s Creek until locals successfully applied to change the name to Albany Creek in 1885) and Daniel Jenkins purchased the blocks that now comprise almost all of the forest area – this land has survived wildfires, storms, droughts and major floods. In the past 55 years alone, records show eight major flood events have affected the region (1967, 1972, 1974, 1989, 1991, 2009, 2011 and 2013), with the 1974 and 2011 floods the largest events. Yet the Reserve has barely felt the effects of these floods. 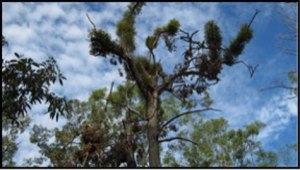 Storm damage in the Reserve from The Gap storm in 2008 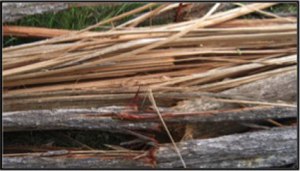 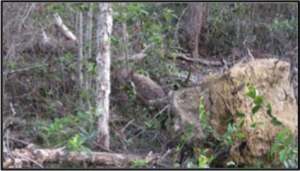 Uprooted tree after The Gap storm in 2008

Albany Creek swollen with floodwaters in 2011

And animals and birds are not the only wildlife to have called the forest their home. Long-time local residents Helen Challinor and Noelle Wardle recalled an old swaggie – known locally as Old Dick – had lived on the northern part of the forest near Albany Creek, only venturing out for supplies. The Websters, too, recalled a bearded man in his 50s who lived in the forest in the early years after they moved to the Clarendon estate.

Descendents of the district’s pioneering families who had established the surrounding produce, pig and dairy farms, the orchards, the vineyard and even the poultry farm doubtless have even more interesting stories about what went on in the bushland over the past century or so. For instance, livestock used to be driven through the bushland between dairy farms. Some farms were owned by wealthy absent farmers who’d drive cattle from regional properties to Albany Creek and then rest and fatten them up prior to sale. This was the case with parcels of land that make up most of the Dawn Road Reserve.

From whence a network of trails came

Many of the old-time cattle trails and original Aboriginal tracks today are key roads in the district. In the past decade or so, some cattle trails became fire trails that today criss-cross the Reserve, constructed by MBRC in consultation with the Rural Fire Service.

MBRC Local History Librarian Leith Barter said that, “until the time of European occupation, the land in the Reserve would have been open forest – much more open than it is today, largely through the fire regime maintained by Aboriginal people”.

“Early settler diaries and accounts emanating from this and other similar regions along Australia’s east coast describe them being able to ride at full gallop through such areas and being able to graze cattle and sheep in such places without the need to fell any vegetation,” Leith explained.

“What they were uniformly greeted with was an open park-like environment with large trees and very little undergrowth. The thickly rain-forested areas along the lower flats surrounding the South Pine River were, of course, an exception to this.”

Today, opposite a portion of the northwestern boundary of the Reserve, is a narrow strip of remnant rainforest on the banks of Albany Creek adjacent to the Grange Bowmen Archery Club.

Nestled alongside Albany Creek, the Reserve in large part owes its existence and biodiversity to the proximity of the creek to this increasingly valuable bushland oasis.

Over the past 160 years, humans have intervened to determine its usage on several occasions and nature has tested its resilience.

Not only has it stayed the course, but the Dawn Road Reserve has also become one of the most ecologically valuable tracts of land in the region.