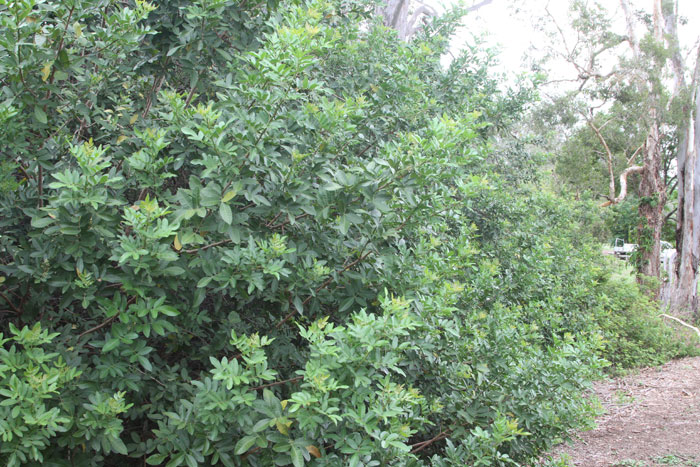 According to the Queensland Department of Agriculture and Fisheries, broad-leafed (or broad-leaved) pepper trees (Schinus terebinthifolius) are a Class 3 declared pest plant under Queensland law.

A native to South America, they have been introduced into domestic gardens and escaped into the wild, invading coastal dunes, wetlands and stream banks.

These trees are not only a pest in themselves, they can harbour ‘witches broom disease‘ that affects citrus, and mango black spot disease.

The original stand of broad-leafed pepper trees and Alexandra palms at the end of McConachie Court, both are pest species that spread into surrounding bushland.

And, in the Dawn Road Reserve, the broad-leafed peppers are proving persistent (hard to eradicate). Where mature specimens have been lopped, a month or so later you can see new shoots from the low stump of the downed tree. This regrowth and the stump will need further work in due course with appropriate treatments administered by experts.

While many mature trees were removed, the now-open area is flooding sunlight on ground where seed of the broad-leafed pepper tree had fallen and already this fast-growing invasive pest is regrowing in the precinct and will need removal in the near future.

The persistent broad-leafed pepper tree was cleared from the Dawn Road Reserve’s special revegetation site, however, a month or so later the stumps of some plants are already re-shooting while fast-growing new peppers have sprung up from seeds dropped from the removed trees. Pics: Trina McLellan