Over the past year, the Dawn Road Reserve Bushcare group has struck up a beneficial alliance with Wild BNE’s Christian Perrin, who has taken an interest in the plantlife, birdlife and wildlife in our patch of bushland.

So when he suggested a flowering plant walk for Saturday, August 6, yours truly didn’t hesitate to go along, armed with a 24-105mm camera with macro setting to allow some reasonable close-ups (of course the sharp near focus is counterbalanced by a shorter depth of field, so backgrounds quickly moved out of focus).

It was wonderful to see a wide variety of plants already in flower, weeks before even spring has sprung. Apart from the black wattle (Acacia concurrens), it was evident that the Brisbane wattle (Acacia fimbriata) was also beginning to bloom profusely, as were the delicate purple blooms on the native hovea (Hovea acutifolia), the delightfully duo-toned prickly pea (Pultenaea spinosa), the dainty forest hop bush (Dodonaea triquetra) and even the barbed wire vine (Smilax australis).

With its yellow perfumed ball-shaped flowers appearing in late winter and spring, the Brisbane wattle (Acacia fimbriata) can be found in riparian (streamside) areas of the Dawn Road Reserve. Pic: Trina McLellan

The Brisbane wattle (Acacia fimbriata) is a small tree that grows to around 7m. Pic: Trina McLellan 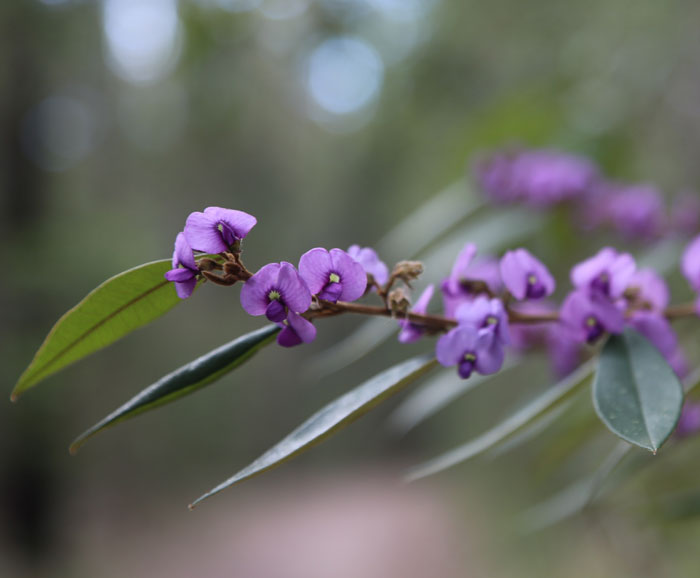 A close-up of the pretty hovea (Hovea acutifolia) in bloom in the Dawn Road Reserve. Pic: Trina McLellan

A different view of the hovea (Hovea acutifolia) that gives a better view of its narrow leaves. Pic: Trina McLellan

While we were scanning the Dawn Road Reserve mainly for plantlife during our two-hour jaunt, eagle-eyed Christian noticed the well-disguised shelter of the Saunders’ case moth (Metura elongatus) nestled snuggly in the crevices of an ironbark tree. He was quick to explain that only the male of the species has wings, so the wingless female stays inside the shelter permanently. 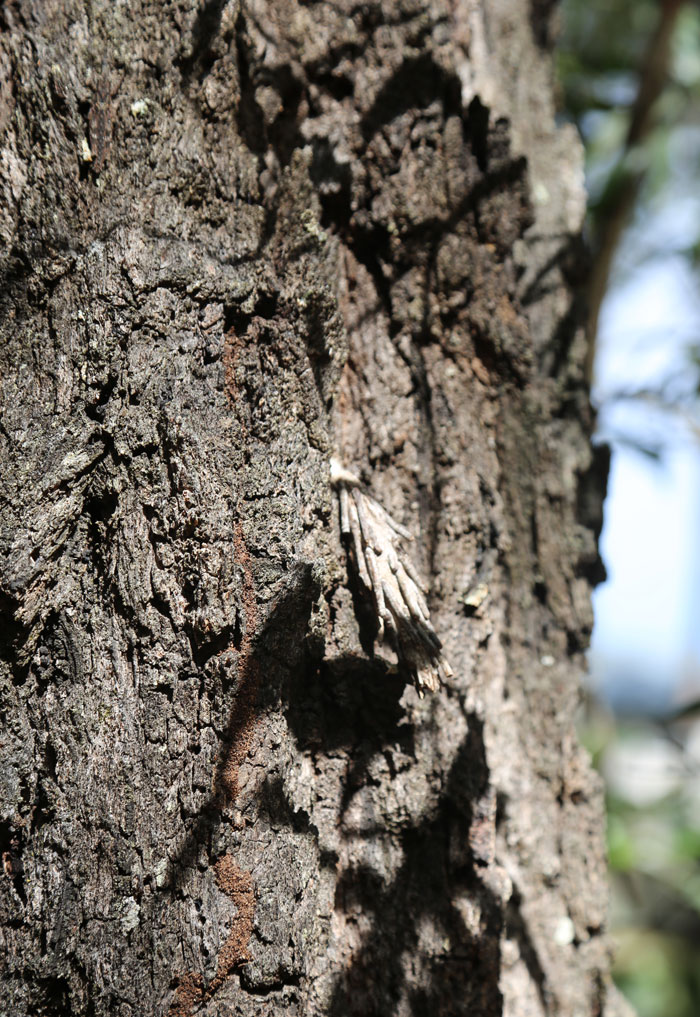 You need to look hard, but attached to the side of this ironbark tree is a well-disguised Saunders’ case moth (Metura elongatus) shelter. Inside its rough-looking shelter is a silken centre which is covered with bits of leaf and parallel short twigs. Pic: Trina McLellan

Both of us were fascinated by the variety of mosses and lichens that were evident right across the reserve – from mosses growing directly on the ground, to tree-hugging varieties and those colonised on rotting logs. Perhaps the most fascinating variety was one of the pincushion mosses (Leptostomum inclinans), with its tiny, erect stems poking up from its greener understorey.

While the Dawn Road Reserve is broadly classified as a dry sclerophyll forest, it does have moist pockets and even some remnant rainforest plant species are evident in its damper, riparian areas alongside Albany Creek and the Reserve’s other streams. 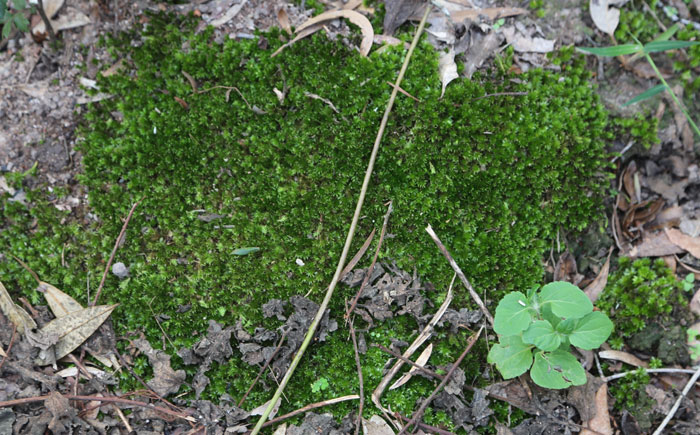 There is a wide variety of mosses and lichens on show in the Dawn Road Reserve. This dark green patch is growing on the ground, on top of leaf litter. Pic: Trina McLellan

Then there are mosses that grow up the sides of trees and stumps of dead trees. This stump’s ground-level hole is probably the front door to a perfectly safe hiding place for a small animal. Pic: Trina McLellan

Downed and rotting logs in moist pockets are magnets for moss colonies in the Dawn Road Reserve. Pic: Trina McLellan

A close up of an unusual moss (possibly Leptostomum inclinans or pincushion moss) with its tiny upright stems. Pic: Trina McLellan

On the homeward bound leg, we skirted along the southern boundary of the Dawn Road Reserve. The Reserve itself belongs to the Moreton Bay Regional Council, but the southern side of the forest runs along the Brisbane City Council border.

Indeed, the back fenceline of the properties overlooking this side of the Reserve mark the actual council boundary, so – in theory – the grassy walkway that runs the length of that edge of the forest forms part of the Reserve.

However, over the years, local residents have introduced a wide range of groundcovers, plants, shrubs and trees in this buffer zone, some of which are harmless. However, other introduced plants pose significant risks to the adjacent bushland.

The buffer zone along the southern boundary of the Dawn Road Reserve is home to a number of introduced exotic species, some of which pose no real harm to the bushland. This pretty pink ballerina orchid (Epidendrum radicans), for example, is growing on the side of a tall tree in the middle of the buffer’s walkway. Pic: Trina McLellan

Another garden variety plant known as the powder puff tree (Calliandra haematocephala) has been introduced on the southern boundary walkway. It has spectacular flowers that bloom into dense reddish-pink hemispheres. Pic: Trina McLellan

Before they bloom, the powder puff tree sprouts these rather odd-looking pods. Although potentially a pest species in the far north of the state, they are growing around Brisbane without too many worries. Pic: Trina McLellan

While this still young but already spectacular Bunya pine (Araucaria bidwillii) is spreading its branches across the Dawn Road Reserve’s southern boundary walkway, one should remember to steer well clear of it in February each year because its cannonball-sized pine nuts can weigh up to 10kg and they are known to come crashing to the ground! So not really a suitable species for a walking path. Pic: Trina McLellan

While those who thought adding a few plants and trees to the walkway would make it more visually appealling, some choices were poorly made. For instance, was the eventual size of the tree considered? Were any potential dangers identified? Were any species harmful to the adjacent bushland?

Sadly, the answer appears to be no. 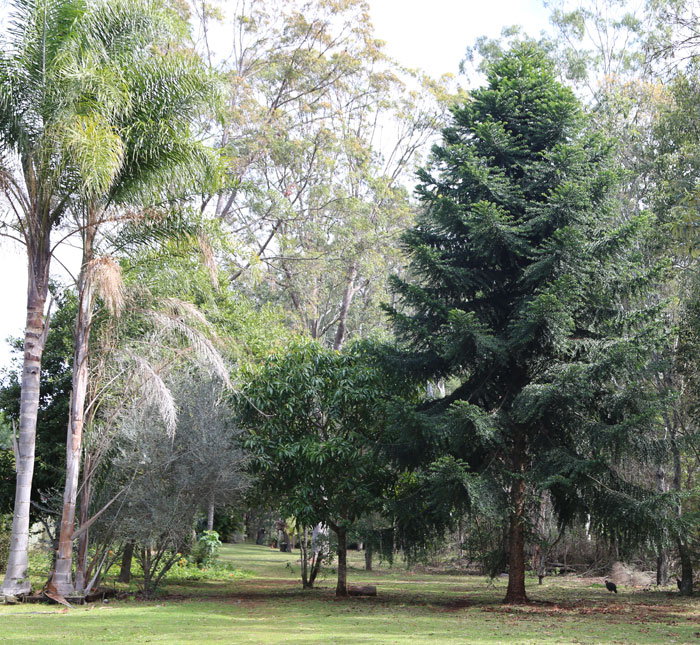 While there is no immediate danger from the Bunya pine, other non-native species around it are already problematic, including the palm trees on the left (birds love their fruit and spread seeds widely) and the mango tree – while still only relatively small – still harbours mosquitoes and will, in time, like the Bunya pine, grow quite large. Pic: Trina McLellan

Mock orange (Murraya paniculata ‘Exotica’), a tree that can typically grow up to 7m in height, is currently ranked among the top 200 most invasive plant species in south-eastern Queensland and should not be growing on the edge of the biodiverse Dawn Road Reserve. Pic: Trina McLellan

While the fruit on this mock orange looks innocent enough, this tropical evergreen is native to Asia and its seed-filled fruit is a magnet for birds that easily spread them into the bushland where this plant becomes an unwanted invasive weed species. Pic: Trina McLellan

If you have only come across multi-coloured forms of the invasive weed lantana (Lantana camara), you might be surprised to know it also comes in an all-white form that is present along the southern boundary walkway of the Dawn Road Reserve. Pic: Trina McLellan

Here a slight embankment on the walkway has been allowed to be populated with two different varieties of lantana, an invasive weed species that is best kept out of the nearby bushland. Other less-invasive species could have been chosen instead. Pic: Trina McLellan 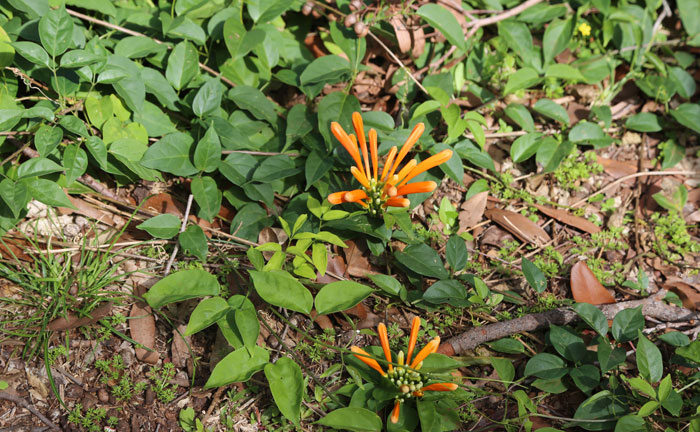 Another introduced groundcover on the Dawn Road Reserve’s southern boundary walkway is the orange trumpet creeper (Pyrostegia venusta). Used to spectacular effect on walls and fencelines, it is a fairly common sight around Albany Creek. However, while it is not a declared pest species, this creeper is a potential weed because it has the ability to just as easily spread and smother trees and native vegetation. Pic: Trina McLellan 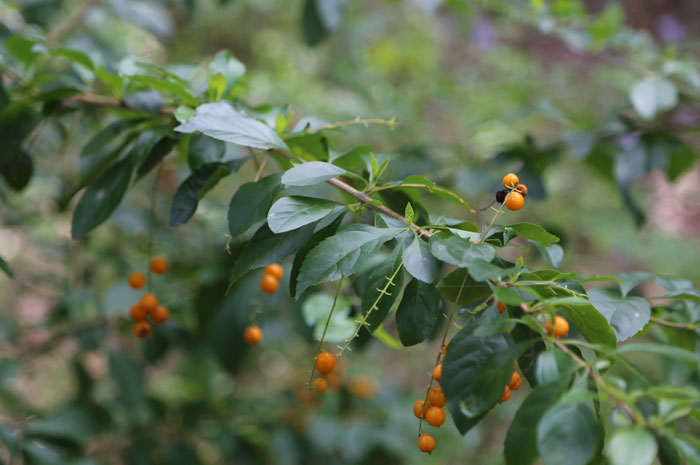 Known widely as Sheena’s Gold (Duranta erecta), this plant is an environmental weed that spreads easily into bushland. Sold widely in nurseries until a few years ago, it now poses a significant risk to natural habitats. Pic: Trina McLellan 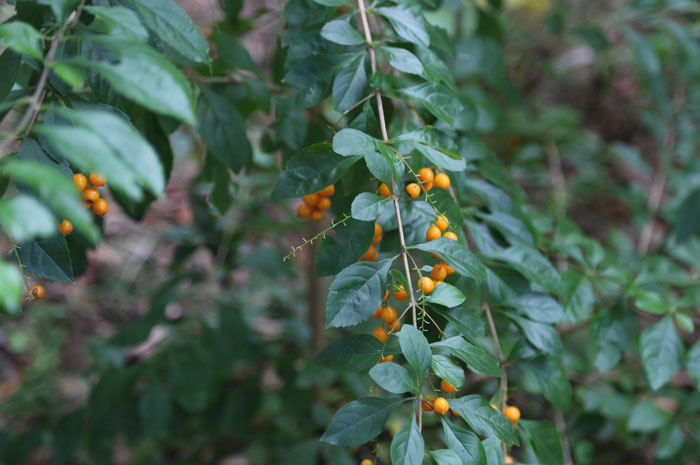 Known also as golden dewdrops (Duranta erecta), this particular specimen was planted, or dumped, right on the edge of the Dawn Road Reserve. It is now beginning to set fruit and has already begun to spread inside the Reserve. Pic: Trina McLellan

As we traversed the Dawn Road Reserve itself, there were already a number of blooming weed species established in areas that should only be populated by beneficial species. The weeds we photographed included the coral berry bush (Ardissia crenata), bracken fern (Pteridium esculentum), multi-coloured flowering lantana (Lantana camara), the Mickey Mouse plant (Ochna serrulata) and wild tobacco tree (Solanum mauritianum).

The coral berry (Ardissia crenata) was coming into bloom in a Dawn Road Reserve riparian zone alongside Albany Creek. With its distinctive clusters of bright red berries and glossy dark green leaves, this former garden plant has become a weed in natural environments. Pic: Trina McLellan

While this nearby lush glade of bracken fern (Pteridium esculentum) looks pretty, the fronds of this fern are highly toxic and have been linked to cancer if ingested. While it reproduces by spores rather than flowers, its new season growth is bright green, while older fronds are deep green. Because of its toxicity and growth habits, bracken fern is considered a noxious pasture weed that needs to be eradicated. However, here it is holding off other more invasive weed species. Pic: Trina McLellan 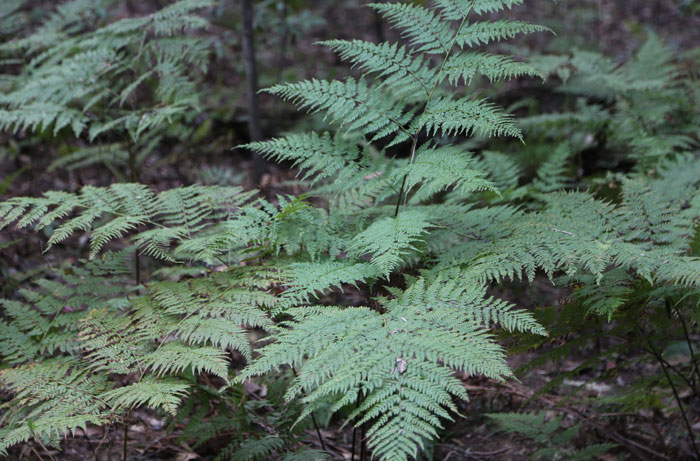 With erect, stiff green fronds up to 1.5 m high, the bracken fern has an extensive, spreading root system, with underground stems that form a vast network in the soil and give rise to new shoots. This plant needs constant moisture to continually reproduce. Pic: Trina McLellan

Up close and personal with flowering lantana (Lantana camara), which appears in most sections of the Dawn Road Reserve, sometimes as dense thickets. While this weed is not too difficult to remove by hand, when it forms into a thick stand of plants, it is sometimes left in place to provide shelter for small animals. Pic: Trina McLellan

Perhaps the most persistent and common weed in the Dawn Road Reserve is the garden escapee known as the Mickey Mouse plant (Ochna serrulata). Not only is this declared weed difficult to remove or kill completely, it will come back five times more aggressively if slashed, burned or inundated by floodwater. Pic: Trina McLellan 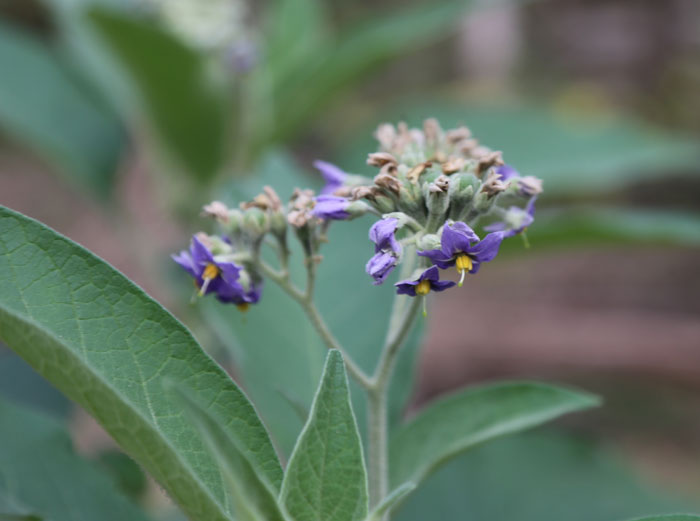 A distinctive cluster of purple blooms on this wild tobacco tree (Solanum mauritianum). While this long-lived tree usually grows up to 4m in height, it can reach up to 10m and its prolific seeds are easily spread by birds and other animals. Pic: Trina McLellan

If you would like to know more about the Dawn Road Reserve, its plantlife, insect and wildlife and help to preserve the amazing biodiversity of our bushland, come along to the monthly two-hour Bushcare working bees on the second Sunday of each month from 8am (unless otherwise advised). Date and time details are posted each month elsewhere on this website (at https://naturewatch-albanycreek.com/when-does-bushcare-next-meet).

If you would like to know more about Christian Perrin’s Wild BNE exploits, he also runs a fascinating blog (at http://wildbrisbane.blogspot.com.au).